Paolo Maldini has one of the most impressive lists of club honours in football history. 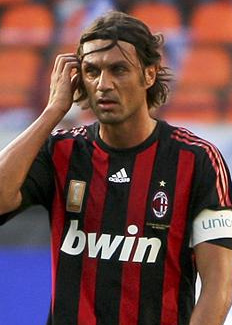 Paolo Maldini has one of the most impressive lists of club honours in football history.

He spent all 25 years of his career at Serie A club AC Milan playing 647 Serie A games (a record) and 139 matches in the Champions League in a 902 game career.

Maldini is one of the best defenders of all time due to his superb vision and a calm mind indicated by his receiving just one red card during his entire career, a rare achievement for a defender.

AC Milan retired the number 3 shirt at the end of the 2008-2009 season. Only a son of Maldini family will be allowed to wear it.