Franz Beckenbauer, known as “Der Kaiser,” (the emperor) was the complete player, both technically gifted and tactically astute, he is undoubtedly one of the best German players of all time. 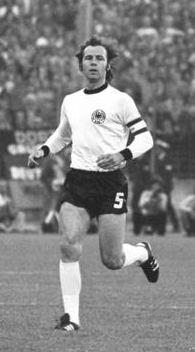 
Beckenbauer is widely credited as having invented the role of modern sweeper.

The 1970s were for Beckenbauer the peak of his footballing career.

Franz Beckenbauer is one of the most decorated footballers in the history of the game.